The transition between seasons sometimes brings rain and snow to the Hanover nest, and while Liberty and Freedom seemed unphased, one wonders how they withstand the onslaught of the elements. After all, humans rely upon raincoats, umbrellas and weather reports to exist in the outdoors with inclement weather, and that’s only if we leave our homes. 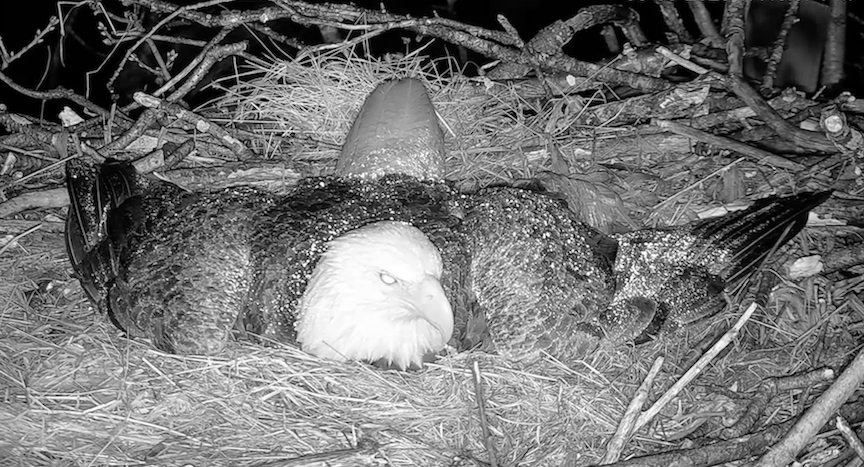 There are three primary tactics that animals use to deal with harsh weather and cold climates:

The choice between these strategies centers around energy expenditure. Animals do everything they can to save energy by utilizing internal and external coping mechanisms. The mind-baffling variety of adaptations that we see within the animal kingdom is partially due to the weighing of tradeoffs, both on evolutionary and individual scales. For example, the question of “to migrate or not to migrate” is written into the genetic code of some birds, because over time the benefits of relocating outweighed the costs.

Some bald eagles migrate, some do not. As you’ve probably guessed, no bald eagles dig themselves underground for hibernation. Those that choose to overwinter as we suspect Liberty and Freedom might, are using a variety of strategies to weather the weather. This would put them in the same category as many of us who either cheerfully or begrudgingly resist the cold.

Bald eagles use several behavioral tricks to get through the winter such as reducing activity and energy expenditure. Studies have shown that during the winter bald eagles are mostly sedentary. For example, in the Pacific Northwest (a region with characteristically heavy rainfall) young bald eagles spend 99% of the day in non-flighted activity. They essentially perch, perch, and perch some more.

Sedentary eagles will also tuck their beak or feet into their feathers to conserve heat. Of the 7,000 feathers on an eagle, the majority of them are down feathers, which provide an insulating layer of air that is warmed by the eagle’s body heat. This layer serves as a cushioning barrier against the cold, and the more a bird fluffs itself, the thicker the layer becomes.

During the winter, carcasses and other prey are hard to come by. Gorging is a behavioral adaptation that many overwintering scavengers depend on. Bald eagles can go a long time without food, and they can also stuff their face when the opportunity arises. The combination of these behaviors sets them up for success during the harshest time of year.

Another useful behavior is to seek insulative microclimates such as conifer trees which provide wind resistance and prevent heat from escaping into the night sky. This is one of the reasons that deer bed down below conifers.

Bald eagles also reduce their body temperature by 1.9 degrees Celsius at night which both slows their metabolic rate and lessens the temperature gradient between their body and the air, therefore minimizing heat loss.

Lastly, let’s not forget about the bald eagle’s size. There is a fancy physics principle that says the bigger an animal is, the less heat loss occurs because the ratio between their mass (body) and surface area (the amount of exposed skin/fur/feathers) is lower. Eagles have a low surface-area-to-mass ratio and therefore they retain heat more efficiently than smaller birds. However, this is another example of a tradeoff because being large means that eagles need more food to stay alive. That’s where efficient foraging strategies come in handy.

The next time we see Liberty or Freedom perched nonchalantly amidst a downpour, let’s pause and offer them a moment of admiration for the fact that they survive with nothing more than the natural wonders of their own biology.

Watch this video for a brief, easy to understand illustration of how surface-area-to-mass effects heat loss in animals: https://vimeo.com/115599120

NOTE ON THIS WEEK'S VISITOR:

Wednesday night around 11pm, a juvenile eagle paid a visit to the Hanover nest. The individual was perched near Liberty, shown in the photo below.

Given that Freedom did not forcefully remove the visitor, and Liberty did not leave the egg to chase him or her away, it could be one of last year’s offspring (Stars or Stripes). Maternal instinct to remain with the egg is strong; however, instinct to protect oneself is stronger for most organisms. If Liberty felt truly threatened, she would have defended the nest more aggressively. Stay tuned for next week’s blog for a deeper look into this scenario and in the meantime, keep watching!