This has been an active week for the eagles with daily visits to the nest, the collection of new substrate such as straw and large sticks, and a surprise feeding event: on Wednesday a squirrel was brought to the nest and consumed right before our eyes!

Throughout their range, bald eagles are commonly known as fish specialists. In 1987, researchers put together a comprehensive assessment of how often various prey items were consumed throughout their range. Out of 20 studies conducted on food habits fish composed 56%, birds 28%, mammals 14%, and “other” 2%. Bald eagles are, however, opportunistic feeders and scavengers meaning they take advantage of food availability whenever possible, including (you guessed it) dead animals, called carrion.

This flexibility makes them one of the most effective predators of the sky, as well as the ground. Bald eagles are capable of displacing most other avian scavengers such as magpies, crows, ravens, vultures and other bald eagles. In fact, eagles use these other species to find food, essentially receiving “tip offs’ by keeping close tabs on their whereabouts and following them to carrion.

Bald eagles rely on carrion most heavily during the winter time, when bodies of water may have iced over and other common food sources such as waterfowl and small mammals have either migrated or sought refuge from the cold underground. In some regions eagles take advantage of seasonal buffets. In the Pacific Northwest for example, there is a mass exodus of eagles during August and part of September as local birds have learned where to go to feed on dying salmon at the end of their long journey upstream.

An eagle’s age affects not only their feeding efficiency, but also their feeding “niche” within a habitat shared by many individuals. Nestlings are primarily fed carrion and even after fledging, it can take young eagles a long time to become successful hunters and therefore they often take advantage of the easiest, less desirable prey until they gain more advanced skills. For example, when two beaked whales washed ashore on Amchitka Island in Alaska, of the 120 bald eagles that showed up 90 of them (75%) were immatures even though the population was mostly adults.

In a study conducted in 1987, five foraging methods were identified for bald eagles: hunting in flight, hunting from perch, wading in the water, cooperative hunting and hunting on the ground. This alluring spectacle has been documented specifically in Utah where eagles were seen working together to flush and kill black-tailed jackrabbits as well as in Florida in which a pair cooperatively hunted for cattle egrets!

Taken as a whole, we can see that the feeding habits of bald eagles are remarkable, diverse and flexible depending on what food is available, where the eagles live, age, and even the skill sets of individuals. It is these examples of strategy and cunning food acquisition that make bald eagles one of the most rewarding members of the wildlife community to observe. There are few sights as potent as a bald eagle with blood on its beak and that unique look in its eye, reminding us all of their inherent and beautiful wildness. 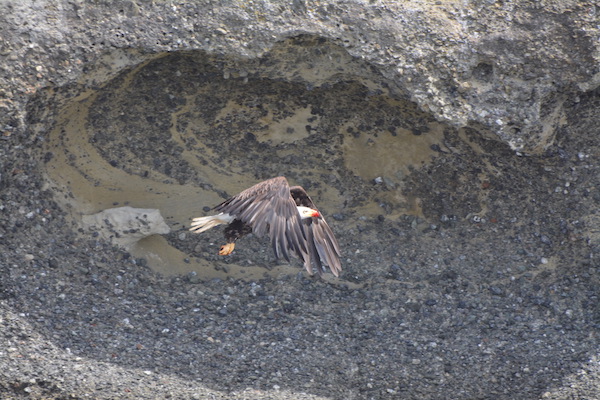