Today is the 46th day since the Hanover egg was laid. Unfortunately, your speculations are correct: at this point, the nest has failed. The “hatch window” for bald eagles is between 34 and 38 days, with 35 days being the average. There have been rare accounts of eggs hatching later, however I could not find any mention of eggs hatching past 44 days.

Watching these hard-working parents incubate in vain was an understandably difficult scene to observe. That being said, failed nests are a relatively frequent occurrence within the raptor world, and even highly experienced parents have bad years. For large eagles in particular, successful fledging of 2-3 young is not a consistent outcome.

There are several potential reasons why this year’s egg did not hatch:

1. The chick was unable to break out of the shell

1.  Sometimes a fully developed chick will struggle to emerge from the egg, either because it is too weak, oriented downward at hatch time, or too large to properly maneuver through a small opening. The size of a chick can be impacted by humidity levels; high humidity increases the rate of water loss within the egg resulting in a smaller, weaker individual. In this case, we did not see clear signs of emergence such as a crack or a pip in the eggshell, implying that incomplete fertilization or embryonic death are the most likely causes of this year’s nest failure.

2. Incomplete fertilization may have occurred if Liberty’s ovum was not fertilized by Freedom’s sperm at the right time, either due to poorly timed copulations, low sperm count, or poor-quality sperm.

3. Embryonic death could have taken place at any stage in development. A potential reason for this outcome would be insufficient gas and water exchange between the inside and outside of the egg. The composition of the eggshell must be the right thickness to allow gas exchange, yet simultaneously prevent bacteria from entering the inside of the egg. If there was an imbalance in these structural components, growth may have failed. As development progresses, the eggshell naturally becomes thinner as the chick absorbs some of the calcium into its bones, and consequently the egg becomes more delicate and susceptible to breakage. Although Liberty and Freedom were noticeably careful around the egg, jostling may have occurred without notice and if an opening was created, bacteria may have entered. Other potential causes of embryonic death could have been insufficient nutritional health of the mother, issues with rolling the egg, or inadequate incubation resulting in a poor growth rate for the embryo. As we all know, Liberty and Freedom are experienced incubators and rarely left the egg. Therefore, whatever happened was likely internally derived.

Bald eagles do not have pocket calendars, nor do they keep note of when the hatch window has closed. Rather, they are attuned to signs that the chick is beginning to emerge from the egg. If these cues do not occur, a pair’s natural inclination is to continue incubating. Liberty and Freedom have already recognized (in their own eagle way) that the egg was non-viable, hence Liberty’s consumption of the egg’s contents. Although a mother eating her own egg may seem quizzical to us, few wild animals can afford to pass up a nutritious meal regardless of its origin. At this point both Liberty and Freedom know they will not be raising offspring this year, and ensuring their own health is the next task.

At this point, Liberty and Freedom may hang around the nest for 1-3 weeks, depending on their movement strategy. If they are migratory individuals, they may leave early. If they plan on sticking around all year, then the nest may continue to function as a roost or feeding site for a while. Eventually, we should see them depart the nesting area. 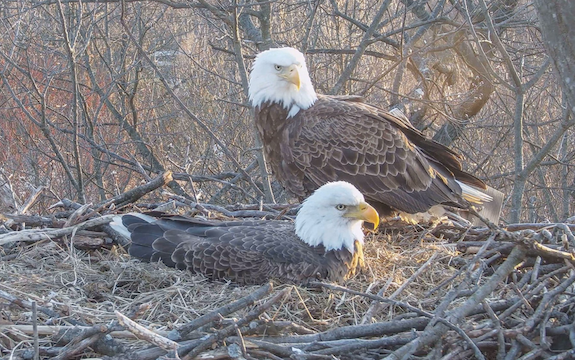 Double clutching, in the bird world, is the term for when a pair lays a second clutch if the first fails. In reintroduction programs, conservationists sometimes use this breeding strategy to bolster population growth for large endangered raptors - such as eagles and condors - by removing a pair’s first clutch in hopes that they will lay a second. The first clutch is then raised artificially, resulting in higher-than-normal breeding outputs.

Double clutching occurs in the wild as well, though rarely for bald eagles. The Hanover breeding season is probably too far along for Liberty and Freedom to try again. If both eggs had failed early, then their reproductive systems may have still been at the right levels to produce another clutch. At this point, the opportunity has likely passed.

Bald eagle nests across North America fail every year. Thankfully, many more succeed. The natural ebb and flow of nest productivity is a reality that birds have been facing for time immemorial, and while our hearts ache for Liberty and Freedom, their experience of losing a child may be quite different from our own. They have the opportunity to breed every year, so the loss of one season, while significant, does not prevent them from contributing to the gene pool. Furthermore, the bonds between eagle parents and their offspring are short-lived, and raising young is a draining activity for adults. Both Liberty and Freedom will likely use this newfound time to bolster their body condition and strengthen their pair bond, priming them for higher chance of success next year.

As a supportive community of observers, the best we can do now is hope that Liberty and Freedom have a healthy and happy winter. We may continue to enjoy observing them near the nest before they head off to fill their time in other ways. They will likely return next season with the strength to start the breeding cycle once again. Given their resilience thus far, the future for our Hanover friends looks bright. 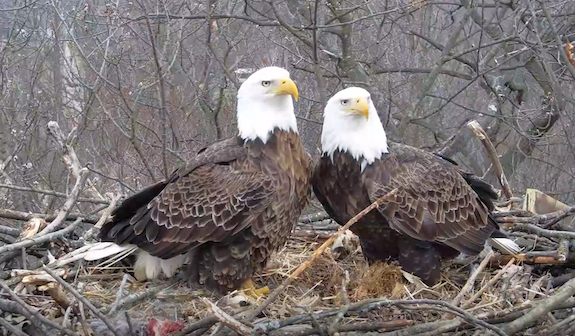 Raptor Resource Project (2018). Is the last egg going to hatch? Retrieved from:
https://raptorresource.blogspot.com/2016/04/is-last-egg-going-to-hatch.html?fbclid=IwAR0w2zNc4x7Tgcj-u7krajbJFIA4yWwliql75e5Q59GtHxoaNctyjpyCrbc

The local online casino has promised to supervise the chick of this pair of birds. The money for the maintenance of the animal will be taken from the welcome bonuses. A player who decides to join a charity event will be able to donate from 5% to 50% of their sign up bonus casino bonus for the life of Hanover Bald Eagle.