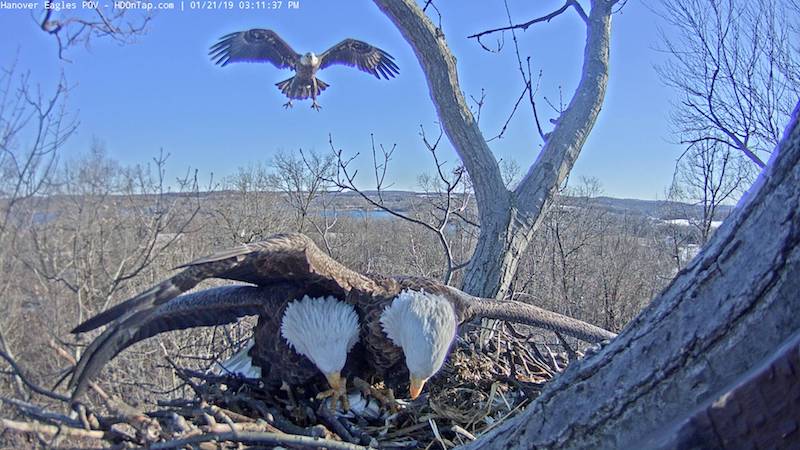 On Monday afternoon the Hanover cam showed not two but three eagles flapping towards the nest emitting high pitched vocalizations that rang out in all directions. Liberty and Freedom landed heavily in the nest and traded control of a fresh-caught fish, clearly agitated at their visitor who hovered briefly before taking off to establish a presence from afar.

There are at least two potential reasons for this high-speed chase:

• Attempted kleptoparasitism, the behavior in which one animal “pirates” food from another, in this case eagle-on-eagle theft.

• Attempted usurping of mate and territory

Stealing food from other successful foragers is a common strategy for bald eagles, especially during periods of food stress such as the winter season (amusingly, Benjamin Franklin pushed for the wild turkey as our national symbol because he felt that bald eagles demonstrated “poor moral character”). These sneaky interactions between eagles have been shown to occur most often in areas of high eagle density, where competition over resources is intensified. Just as calorie-deprived humans become hangry (we’ve all been there), bird manners also suffer when food becomes scarce.

For example, bald eagles and turkey vultures share habitat in both Washington state and Pennsylvania, however in the latter state vultures often abandon a carcass as soon as an eagle shows up. However, in Washington, vultures don’t think twice about sneaking up behind a feeding eagle and stealing entrails from between their opponents legs. It appears that in a region supporting many eagles, vultures must develop “tough skin” to gain access to enough carcasses. They cannot afford to be afraid. 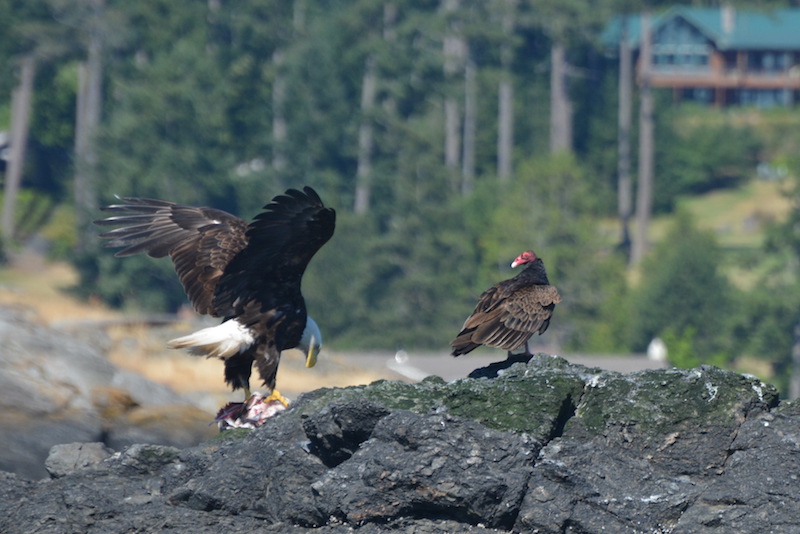 One study investigating conflict between bald eagles discovered that actual physical contact is rare, with strikes occurring only 2% of the time out of 541 observed “pirating” events. This being said, it is not uncommon for rehabilitation centers to receive bald eagles with puncture wounds from antagonistic interactions with other eagles, though these events are rarely fatal. Size, level of hunger, and positioning (attacking from the air vs. ground) are the main predictors of victory in a food-related eagle skirmish. Surprisingly, age has not been shown to make much of a difference in the outcome. Duels also occur when an unmated eagle wishes to dethrone a mated eagle, and gain access to their mate and territory. Because there was a fish present during this week’s event this is a less likely cause, though territorial conflict is not uncommon among bald eagles, especially during pre-nesting season.

The vocalizations from this week’s event included high “peals” of squeaky irritation emitted from both Liberty and Freedom mixed with distant calls of the third eagle, a chorus of intrigue. Threat vocalizations are thought to be a preventative measure, serving to lessen the need for physical contact. These calls are often accompanied with an extended neck, raised hackles (the feathers on the back of the neck), head thrown back, crouching, and/or raised wings. Liberty and Freedom demonstrated all of these moves on Monday, and for now, it appears they were successful in deterring their pursuer. Let’s hope they have staked their claim once and for all!