Happy belated Valentine’s Day to the Hanover eagles! Love is likely in the air, seeing as the first egg at this nest has historically been laid around this time, and copulation may occur soon if it has not already. In 2018 the eagles laid their first egg on February 20th and the second on February 23rd. 2017 proved to be a successful year, and eggs appeared in the nest on February 10th and 13th. In 2016 the first egg appeared on the 18th. Just as humans refine their parenting approach through trial and error, older more experienced bald eagle pairs will sometimes lay earlier as they become well-versed in the preparation required to successfully fledge young. Environmental conditions can also impact timing of reproduction, though not for the reasons you might expect. 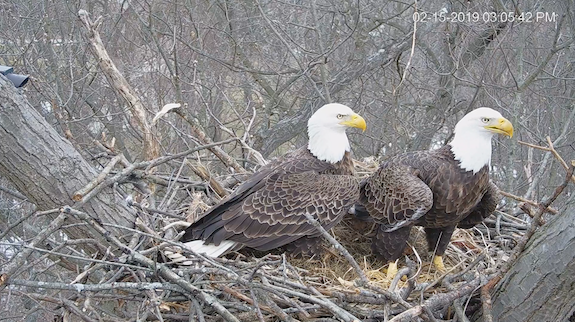 Breeding success in eagles is affected by internal factors such as body condition of the female, external factors such as human disturbance, and combinations of both such as the production of sex hormones (internal) in response to changing daylight levels (external). Some of these details are challenging for us to detect as observers. However, one external condition that we can all see is weather. 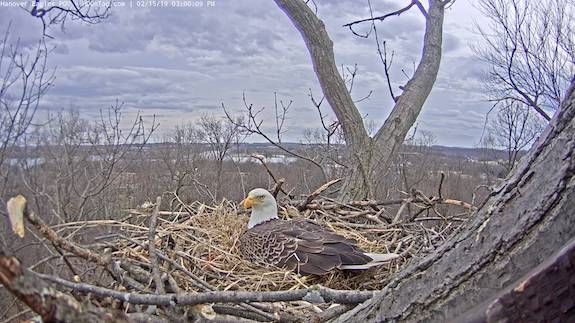 This week the Hanover nest didn’t look as homey as usual with its accumulation of snow and ice. Fortunately, these conditions on their own do not pose much of a threat to Liberty and Freedom’s likelihood of raising young. Many early studies of bald eagles showed that lack of food availability rather than exposure to cold or wet weather was most responsible for breeding failures. 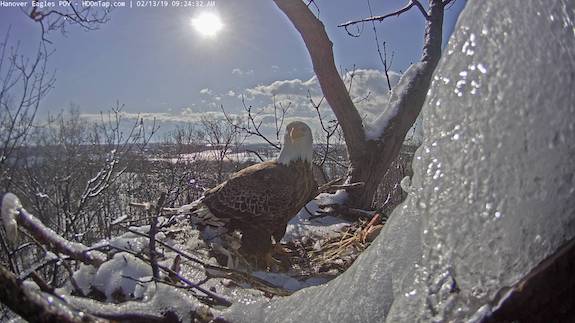 The female must be in adequate body condition to lay healthy eggs, and body condition is affected by how much she food she consumes in the months leading up to mating season. Therefore, weather can indirectly affect reproductive success by jeopardizing food availability. Since bald eagles are primarily fish eaters, those that rely on a body of water for their food through the winter face the risk that the lake or pond may ice over, thus forcing them to seek sustenance elsewhere. However, as we’ve learned, bald eagles are scrappy scavengers and they stand a good chance of prevailing even over the iciest of conditions by taking advantage of alternatives like landfills, butcher scraps, and road kill. So, as long as Liberty and Freedom have enough to eat, they have a good shot at producing a healthy egg or two.

Severe weather is more concerning once eggs or chicks are in the nest, as they are vulnerable to the elements in ways their parents are not. The following table was created by the US Fish & Wildlife Service, explaining which times during the bald eagle breeding season the birds are most sensitive to human disturbance. This provides us with helpful tips on how to ensure we do not further complicate Liberty and Freedom’s chances, and also puts their breeding chronology in context. 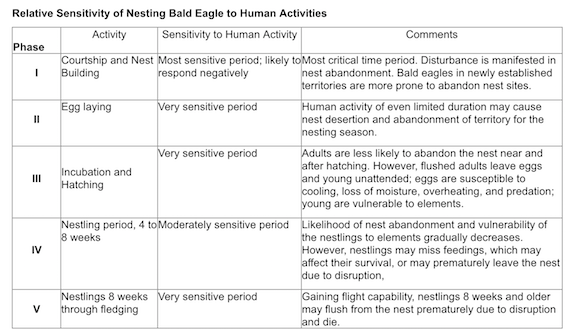 The more invested the parents become, the less likely they are to abandon their nest. In other words, the closer the female gets to laying eggs, the more committed both parents become to protecting them even if it means sitting beneath several inches of snow. Seen in the light of our recent storms, this implies that Liberty and Freedom are far enough along in the “prep” season that she will likely do everything she can to successfully lay, including weather the weather whatever the weather.

We must keep in mind that bald eagles are remarkably adapted to dealing with a variety of environmental conditions, and the fact that we sometimes see them at the nest with snow on their backs is actually a good thing. This means they are not losing enough body heat to melt the snow, a remarkable aspect of their biology that shows just how suited for the cold they really are. That being said, Liberty and Freedom have already survived one polar vortex so let’s cross our fingers that they (and we) don’t have to endure another.

If you see Liberty and Freedom mating in the weeks ahead (which will most likely happen away from the nest on a high branch), that is a good sign that eggs could be on the way. Copulation occurs 5-10 days before eggs are laid so keep your eyes peeled and stay warm!

Below is a chart showing the different laying timelines for bald eagles across the country, courtesy of the U.S Fish & Wildlife Service: 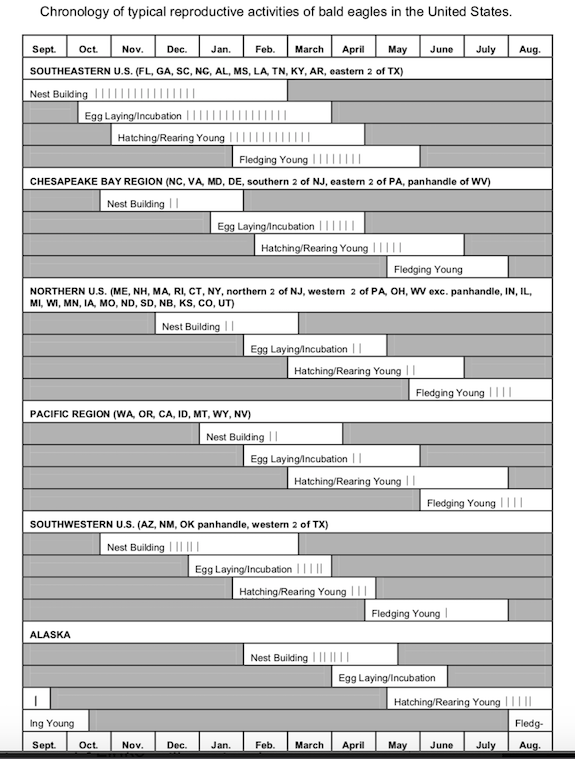