As you may have seen, Liberty and Freedom have copulated at the nest! If this was a successful attempt, we would expect eggs to appear in the next 5-10 days. This was not only an uplifting reminder that snowstorms don’t damper their baby-making mood, but also an opportunity to delve into the physiological processes that follow insemination.'

Environmental cues are one of the main catalysts for a bird’s breeding season, such as changes in day length, light intensity and air temperature. These can be region-specific (in arid climates rainfall also acts as a trigger for the reproductive process) and species-specific (a ground-dwelling parrot called the Kea of New Zealand begins sperm production as the days shorten, breeding instead in the winter time).

The most universal of these cues is photoperiodism, defined as any response to day length. Changes begin in the pituitary gland first, responsible for releasing sex hormones whose influx within a bird’s body result in the readiness of the reproductive system.

Important components within the female reproductive system include the ovary, ova and the infundibulum, a funnel-shaped passage through which the ova pass as they enter the oviduct. From the oviduct they make their way to something called the cloaca, which is an exit chamber unique to birds through which feces, urine, and eggs are released. Both males and females have a cloaca.

Within the male’s system are gonads/testes (yes, gonads is a technical term) and a deferent duct which is what sperm travel through on their way from the gonads to a storage unit near the cloaca. As you may have guessed, male birds do not have ova, oviducts, or an infundibulum. 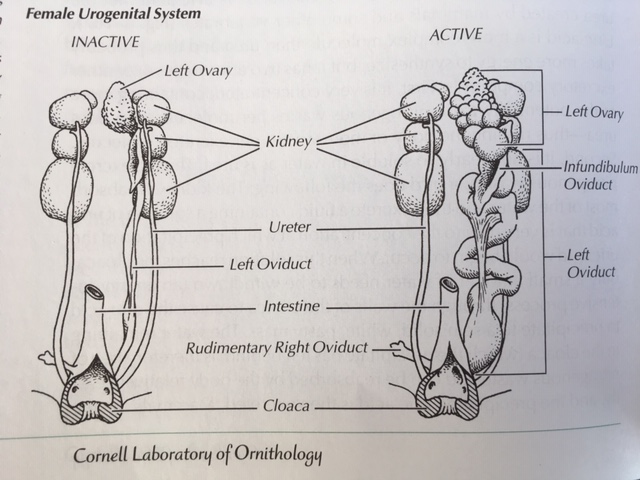 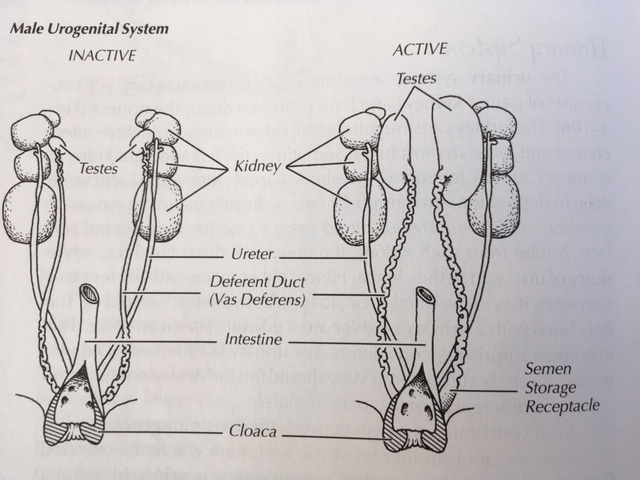 Copulation (sex) in birds is generally quite brief, and happens when the everted (opposite of inverted) cloacas of birds come into contact in a term called the “cloacal kiss.” This is when sperm is transferred from the male to the female. Because this process is so brief, many biologists use the term insemination instead of copulation, though admittedly both terms sound remarkably unromantic. Some larger bird species actually copulate more than may be necessary for ensuring fertilization, and charmingly, this is suspected to be a way of strengthening their pair bond.

Sperm lives longer in bird oviducts than in most mammals. After insemination, sperm makes its way to the infundibulum where fertilization may occur. These fertilized eggs are called zygotes, and as they travel towards the exit point at the cloaca, growth slows until the egg can once again be warmed by an incubating parent.

A developing bird embryo needs to constantly receive heat. Because feathers are poor at conducting heat as a way of helping maintain the bird’s body temperature, soon-to-be parents develop a brood patch, which is a bare section of skin through which heat is more easily transferred from the parent to the egg. In species where both male and female incubate, both will develop a brood patch. Development of this patch is actually another helpful clue for predicting when eggs may be on the way because the loss of feathers is sometimes visible, and occurs before the first egg is laid.

Eagles, like other species, have over time developed the breeding process that suits their life history traits best. In other words, each bird is sitting in the goldilocks chair of reproduction for their species. Some years things won’t go as well as others, but even for species that have a high juvenile mortality rate (meaning a large percentage of the young won’t make it to the next year), those losses typically balance out rates of reproduction. Otherwise, the species wouldn’t exist at all.

Seen in the context of the Hanover nest, this means that Liberty and Freedom wouldn’t be nesting when snowstorms are still common if they couldn’t handle the consequences or threats that such weather poses to their nest, or their reproductive success. Their system may not always be successful, but it’s successful enough, or we wouldn’t have the privilege of seeing as many eagles as we do now do throughout North America!

Fun Facts:
• Interestingly, ratites (a term meaning flightless birds such as emus and ostriches, thus named for the “ratite” breastbone that birds in that group all have) and waterfowl have a “copulatory organ” another name for we-all-know-what that is not the same as that of a mammal because there is no internal urethra. Therefore sperm travel on its surface, and it requires lymphatic pressure rather than blood in order to “get ready.”

• “Old” female birds are just as likely to be able to lay eggs than younger birds, generally speaking. In fact, in some species such as the California Gull, it’s been shown that older females may produce more during their final years, almost as a way of giving it one last strong go, to try and ensure their genetic material will live on.

• Bald eagles in Florida start breeding in November, meaning their reproductive systems are using a different primary cue. For birds breeding closer to the equator, day length is not as strong of a trigger because the difference between the longest and shortest days is a smaller margin than further North. Therefore, it may be that daily light intensity, which increases beginning in September in Southern Florida, initiates changes in the bald eagle reproductive system.

Read about the world’s oldest known wild bird, a female Laysan albatross that is still laying eggs at 68 years old!