Today marks the 18th day of incubation for Liberty and Freedom’s first egg, and the 14th day for the second egg. This means that if the incubation timeline follows a “normal” trajectory, the embryos are roughly half-way developed and soaring along in their growth underneath the protection of eggshell. But what about the eggshell itself – have you ever wondered what’s responsible for the color of bird eggs?

In your brief glimpses of the eggs you have probably noticed they are white. The causes of egg coloration have been a topic of much debate throughout the history of oology (the study of eggs). Amniotes are animals that lay eggs on land or retain a fertilized egg within the mother such as reptiles and mammals, contrary to amphibians and fish which are anamniotes (tongue-twistingly similar words) and must lay their eggs in water. Interestingly, birds are the only amniotes that lay eggs with color, and this has led many researchers to wonder: what makes birds different?

With the broad diversity of bird egg aesthetics, identifying the why and how of egg coloration proves to be a tantalizingly tricky endeavor. The familiar theme of trade-offs is partially responsible for this complexity; egg shells are made of a substance called calcium carbonate which is naturally white. Producing pigments requires the female to invest energy and therefore the rewards of coloring an egg must be worth the energy it requires, or the process would likely harm the species rather than help it.

The “pressures” so to speak that dictate the appearance of bird eggs seem to relate to predator avoidance in many, but not all species. The more camouflaged a clutch of eggs, the less likely they are to be eaten by a hungry predator. Take the killdeer for example: 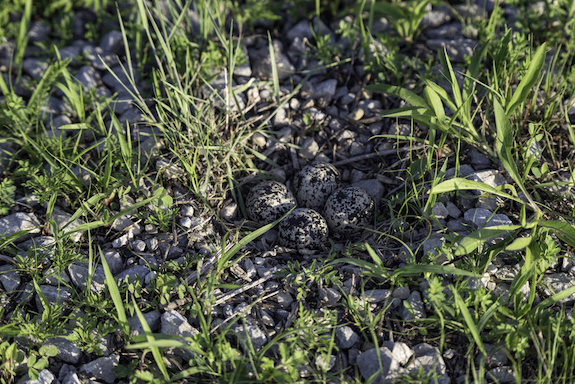 For ground-dwelling predators these eggs would be difficult to see, not to mention killdeer parents will pretend to have a broken wing in order to lure approaching predators away from the eggs, preventing the hungry intruder from having a chance to spot them in the first place.

Other birds such as the robin have conspicuous and easily detectable eggs which would seem to put them in danger. 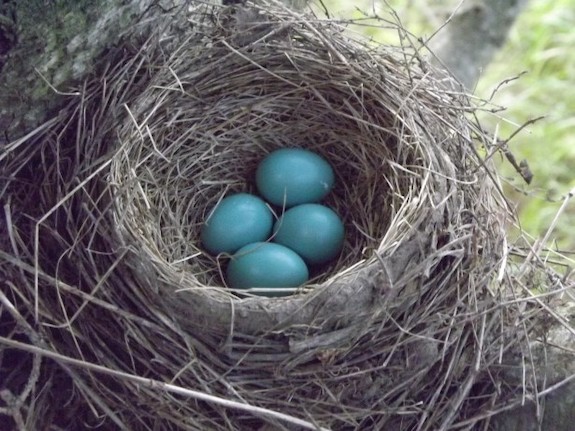 In this case, the leading thought is that perhaps by having such noticeable eggs, robins are able to spot “intruder” eggs more easily and avoid falling victim to nest parasitism which is when a species such as the brown-headed cowbird lays their eggs in the nests of other birds and let them to the dirty work of raising the offspring (rude, but ingenious). This can be detrimental to the host parent as they end up spending time and resources on a chick that is not their own, sometimes compromising the growth of their own chicks. Robins are known as “rejecters,” meaning they quickly dispose of alien eggs and this reaction could be related to the unique color of their own eggs, serving as a tip-off for when one doesn’t match the rest.

For some colonially nesting birds like the common murre, there is a great deal of variation among individual eggs and this is thought to assist parents in identifying their own egg, so they don’t accidentally plop down on their neighbor’s clutch instead of their own. 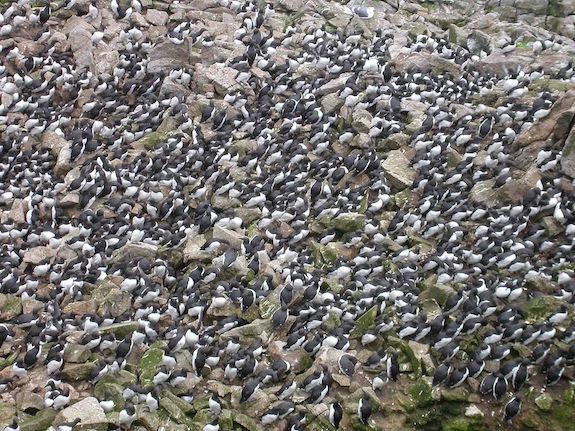 Imagine finding your chick in this murre colony! Photo by Duncan Wright

But how do all of these various elements of egg coloration relate to Liberty and Freedom?

Which of these threats do you anticipate would be of biggest concern to our Hanover parents?

Identification of their own eggs

You guessed it – none of these are a big issue for bald eagles. Great-horned owls, crows, ravens, gulls, and some tree-climbing mammals are potential predators, but due to the extreme heights of most eagle nests, their aggressive behavior, large size, and their relatively constant incubation, the chance of a predator snatching eggs is significantly less than with many other species.

Brood parasitism is not very common in raptors, and I for one would choose many other host parents before I would attempt tricking a bald eagle. And, for obvious reasons, eagles don’t have to worry about identifying their own eggs over that of their non-existent next-door neighbors.

So, with these considerations in mind, the fact that bald eagles lay white eggs makes sense. They begin incubating as soon as their first egg is laid, and the nest is high enough that if a predator finds them it would not be due to their whiteness. Some researchers theorize that white eggs do a better job of dispelling solar radiation to protect the embryo from overheating. This has not been proven for bald eagle eggs, but there could be thermoregulation benefits for embryos within white eggs.

Egg coloration is a field riddled with speculation and challenging questions. The scientific community has much to learn about the details of eggs, and raptor eggs in particular due to the secretive tendencies of adults and the logistically complicated study protocols involved in raptor research. Most of what we know of bird eggs comes from poultry studies, colonial seabirds, and/or analysis of museum displays. The ecological and evolutionary factors that dictate the way an egg looks are endlessly fascinating and asking ourselves why and how a bald eagle’s egg looks the way it does is certainly a worthwhile process.

There was a remarkable occurrence in 2017 of a red-tailed hawk (eventually named Spunky) being successfully raised and fledged by a bald eagle pair in British Columbia! No one is sure what this represents in bird world, but it was a captivating and thought-provoking story. To read more visit: https://www.eagles.org/red-tailed-hawk-baby-raised-eagles-nest/