What’s all this about intrusions? 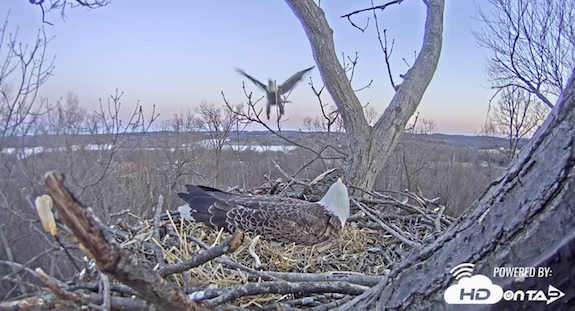 This week another intruder event was documented at the Hanover nest, eliciting an array of vocalizations from the incubating parent. When witnessing this type of behavioral interaction, it may seem odd that another eagle would try to disrupt Liberty and Freedom at this stage in the breeding season. Is it to steal a mate? A territory? The nest site?

In 2014 Courtney L. Turrin from the College of William and Mary completed a thesis on intrusions, shedding light on details of this often-documented but rarely explained event. While her work focuses on a population of bald eagles in the Chesapeake Bay area, many of the patterns there are likely reflective of other populations in the Eastern U.S.

Turrin’s studies revealed a fascinating shift in the number of intrusions within the Chesapeake Bay eagles. Intrusions are usually initiated by “floaters,” meaning non-breeding birds that are seeking territories as a result of limited space. In essence, when there are not enough nesting territories to support all mature adults in an area, some end up without a job for the breeding season. More seriously, they end up without a mechanism for passing on their genes, a circumstance that most living things strictly avoid. Therefore, most floaters don’t give up without a fight.

Think about the way people respond when there are only a few spaces available in a crowded coffee shop. While getting your caffeine fix is not the most serious objective to solve, for some of us, it’s non-negotiable. People will spy on tables, put their coats on chairs to reserve spots, and even argue over prime sipping space. With limited availability of suitable habitat, dynamics get intense. Now imagine that instead of caffeine you were fighting over the opportunity to pass on your genetic material. Things could get interesting.

Between 1990 and 2013, the number of floaters in the Chesapeake Bay region increased 5-fold. In the 1990’s there was an average of 11 floater adults per season, but in 2013 that number jumped to over 550 birds. This implies that bald eagle density surrounding the bay has been approaching over-saturation, and the results are having intriguing effects on the frequency and intensity of intruder events.

Naturally if breeding bald eagles are harassed by floaters looking for territories, they will defend their nest. But to what end?

There are several typical bald eagle behaviors that could change if floaters continue to increase at the rate demonstrated in Turrin’s study. With more frequent intruder events, breeding bald eagles like Liberty and Freedom may be forced to respond by ramping up their nest guarding behaviors, downsizing territories, or reallocating precious energy away from feeding chicks to keeping intruders away. This can be especially dangerous during post-hatching when the chicks are most vulnerable and require the most care from their parents.

Responses to intruders include vocalizing (as we saw this week), attacking or chasing, circling the nest area, or perching nearby as a precaution. All of these behaviors qualify as increased vigilance, and vigilance takes energy. Therefore, breeding success can be compromised by intrusion events especially if they become frequent and intense enough to compromise the parent’s ability to care for their young. However, not all intrusions are created equal.

Over time, breeding parents may become less defensive towards other individual eagles such as a neighboring pair they recognize, or even the same intruder. A pair may also become less defensive if they are simply harassed often with no consequences, perhaps deciding that the energy expenditure isn’t worth the threat (there’s that familiar concept of trade-offs again). There also is a difference in defensive behavior depending on whether or not the intruder is a juvenile or adult; juveniles are not yet ready to breed, so their motive for attacking a nest is unlikely for the purpose of stealing territory. An adult intruder however is bad news since they have more incentive to displace a breeding pair and as such their presence elicits a more serious defense.

There is a threshold of how much floater pressure breeding pairs can withstand, and when this threshold is reached, reproductive success is likely to be compromised. However, just because we have witnessed the occasional floater visiting Liberty and Freedom’s nest, that does not mean the Hanover area is over-saturated and there are floaters flying amuck. The nests in Turrin’s study were experiencing an average of one intrusion every three hours. That is significantly more than what we observe at the Hanover nest, implying that the eagles here have not reached saturation.

The increase of intrusion events puts a fascinating spin on the bald eagle comeback from the brink of extinction. Who would have thought in the 1950’s that there would come a day when too many bald eagles were trying to nest anywhere! It’s important to remember that floaters are not inherently bad. Rather, they are a natural result of population dynamics: if the majority of mature bald eagles fledge young each year, those young will soon be reproducing themselves, eventually causing the population to reach “carrying capacity” once there are no longer enough resources for every eagle to successful produce young. Floaters, understandably motivated, and understandably annoying for Liberty and Freedom, are understandably natural.

For now we can take comfort in the clear evidence that the defensive responses from Liberty and Freedom have proven affective thus far. Keep those developing embryos in your thoughts, we are now about two weeks out from a potential hatch date and so far the future is looking bright for the Hanover parents!