the hardship of hatching

The first hatchling is here! At approximately 9:20 this morning a tiny, beautiful, scrunched up altricial baby eagle unfolded into our world. There can be no doubting it now, Spring is here.

Much of what occurs during the hatching process is hidden from our eyes, and as we saw this morning, the chick was well into the emergence process when its mother stepped aside. Given that the egg has provided continuous life support for the developing embryo over the last 37 days, the chick must undergo a process of separation from the very contents of the egg that have made growth possible. But how does it happen?

Many of us are familiar with the typical cartoon depiction of a hatching bird; an orderly egg-cap pops off and the chick’s adorable wide-eyed head springs out to greet the world. 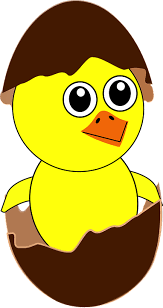 Seemingly nothing to it. In reality, there are several preparation activities occurring beneath the shell that are necessary for the chick to successfully break through. Essentially, the blood, oxygen, and food supplies must be either transferred to the chick’s body or left behind, allowing the baby bird to join the outside world free of its elliptical home. 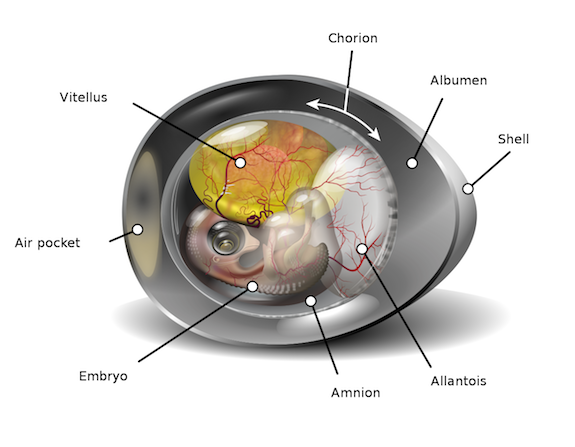 The first step the chick must achieve in preparation for this transition is to halt the flow of blood from the network of blood vessels inside the shell and then absorb the rest of that blood directly into the body.

Secondly, the chick must start using its own lungs to breath rather than relying on the oxygen it has been receiving through the pores of the eggshell. An air cell exists inside the top of the egg, a layer that is more substantial towards the end of incubation that at the beginning due to the shift in the distribution of various fluids as the embryo grows (refer to last week’s egg content chart to see examples of this). The chick must break through this air cell to take a breath that will provide it with the necessary energy to push through the rest of the hatching process.

Now, get ready for the strangest step: the chick absorbs the remaining yolk contents into its abdomen through a stalk that provides a direct channel between the yolk and the chick’s small intestine. This yolk sac will provide food for the young bird during the first days of its life.

Once the chick has successfully completed these processes, it’s ready to start breaking through the shell. About four days before hatching, most birds develop what is called an “egg tooth,” which is essentially a hard calcium nub at the tip of the bill that allows them to “break through the walls of [their] prison,” as described by William Yarrell, the ornithologist who discovered the tooth’s importance. Reptiles and egg-laying mammals such as the platypus also have an egg tooth. After hatching, the egg tooth falls off. In some species such as finches and sparrows, the tooth is instead absorbed back into the bill!

Eventually, with enough vigorous pecking (called pipping), the chick is able to break through the shell and take its first breath of outside air. This infusion of energy allows it to continue hammering away as it rotates its body and presses against the shell to help the process along.

Finally, enough of the shell falls away that the chick is free!

Most parents remove the egg shells from the nest, to avoid attracting predators with the bright gleaming site of broken fragments. Eagles, however, don’t need to worry about this and often the shells will remain in the nest for a time after hatching. We’ll see what Liberty and Freedom choose to do!

Just thinking about the required effort for hatching is exhausting. Each of these preparation steps are achieved by a baby bird with the biological instinct to ensure its own emergence into the world, and they do this almost entirely on their own, an accomplishment that is (quite frankly), incredible.

Stay tuned for the appearance of the second chick in three days or so. Typically, chicks hatch in order of when they were laid. Pretty soon we should have a full nest to observe!