Battle of the sexes

One of the first things we often wonder when we observe nest cams is whether or not the nestlings are male or female. With mammals, this mystery is relatively easy to solve. With birds, it depends heavily on the species. Raptors can be especially challenging because they are less likely to offer external clues such as variation in plumage colors and pattern. For many raptors, we rely mostly on size.

Distinct size differences between males and females for a given species is called sexual size dimorphism. In many animal species, males are larger than females. Predatory birds, on the other hand, have what is called reverse sexual size dimorphism (from here on referred to as RSD), meaning that females are larger than males. Bald eagle females are 1/3 larger than males. They possess a longer leg bone, called the tarsus, a longer toe claw, called the hallux, and also have longer beaks and wings as would be expected given their overall larger size. They weigh more, and they look bigger. The reason for this type of RSD has been a long-debated topic among raptor biologists, and while the exact cause is still undetermined, a variety of compelling hypotheses have been presented that fit into several categories.

The primary ecological suggestion is that raptor species feeding upon fast-moving, acrobatic prey, such as sharp-shinned hawks feeding on forest songbirds, have good reason for sexes to differ in size. Males must be adept at capturing enough food to provide for their mate, and the smaller the male, the more maneuverable he will be when pursuing his winged prey. On the other end of the spectrum are those raptors that feed on carrion or “easier” prey items such as mice. These raptor species like the black vulture or the red-tailed hawk show little to no sexual dimorphism, because maneuverability is not as critical of a physical adaptation when it comes to carrion or mammalian prey.

A physiological hypothesis, proposed by the former Director of Conservation Science at Hawk Mountain, Keith Bilstein, is called the Head Start Hypothesis. This explanation suggests that since male raptors provide most of the prey for their mates and offspring during the breeding season, males must develop more quickly than females so as to become adequate hunters and therefore breed successfully. This hypothesis also proposes that male raptors have little need to be large, since they are equipped with weapons (their talons and sharp beak). Furthermore, since male raptors in several species have been proven to develop more rapidly than their sisters, if they were larger, there would be a higher risk of them killing their female siblings. If faster-developing males are smaller overall, all nestlings regardless of sex have a higher chance of fledgling successfully. Other physiological hypotheses have centered around the idea that larger females may be better suited for effective incubation, and potentially better equipped to handle periods of food shortage since they would have more back-up reserves than a smaller female.

Behaviorally, RSD may be an advantage if large females are better at distributing or preparing food for their nestlings and/or defending the nestlings against predators. These are just some of the proposed ideas behind why there would be distinct RSD in raptors. In all likelihood, the true answer is species-specific, and may involve a combination of these factors. Such conjectures are difficult to verify without designing experiments in which a female’s large size, or a males small size is proven to be advantageous in increasing reproductive success, survival rate, food acquisition, or other important life processes. What we do know is that female bald eagles are larger than males, and whatever the reasons, their system seems to be working quite well!

These types of ecological mysteries are part of what makes the natural world so alluring, and for observational nature enthusiasts such as yourselves, these discussions about the how and why of particular traits can lead to a great deal of rewarding contemplation. Why do you think Liberty is larger than Freedom? What benefits could arise from their difference in size? Do you think the Hanover nestlings are females or males? As a parting challenge, take a look at the following photos and see if you can tell which are the leading ladies. Chances are, we’ll never know for sure. 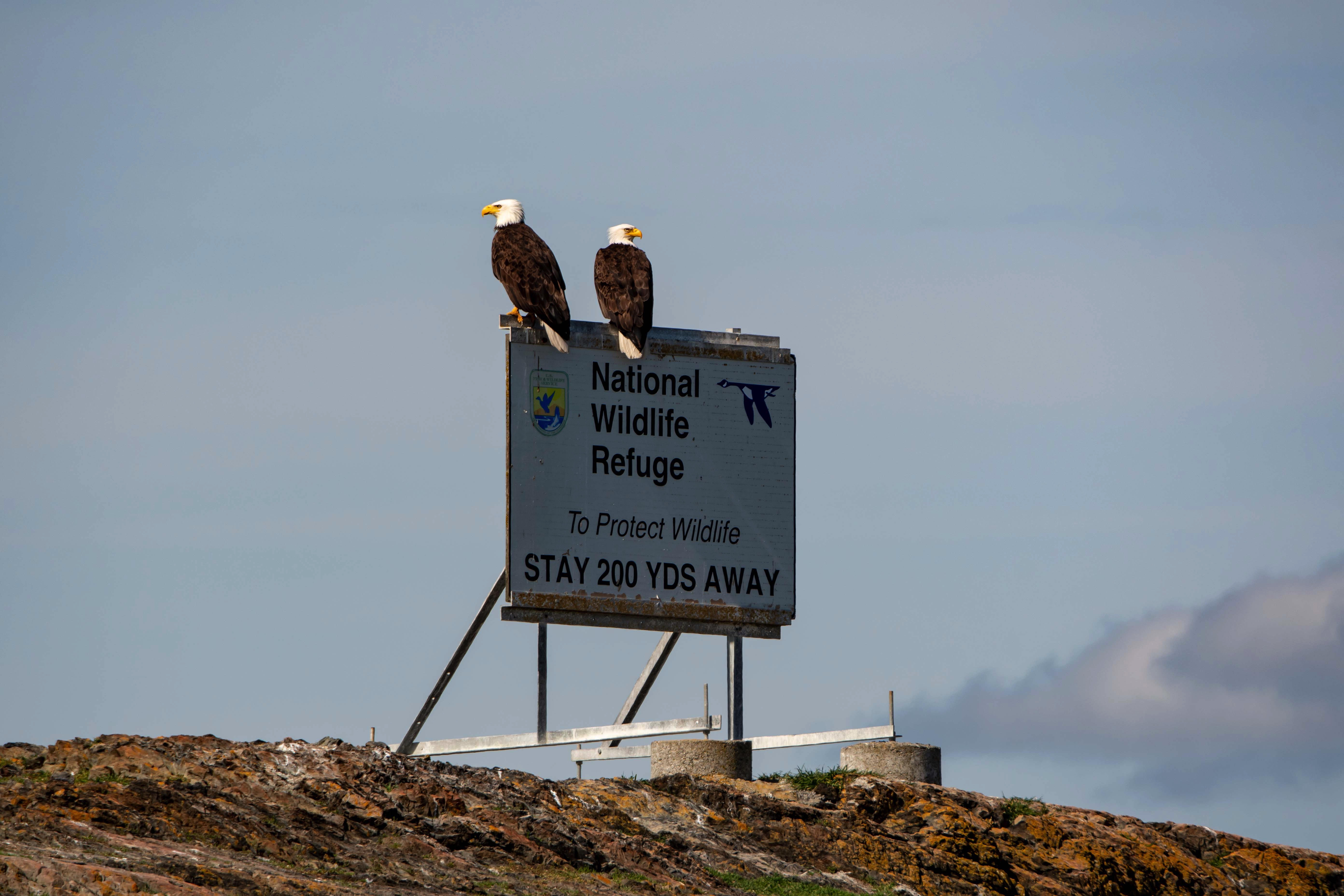 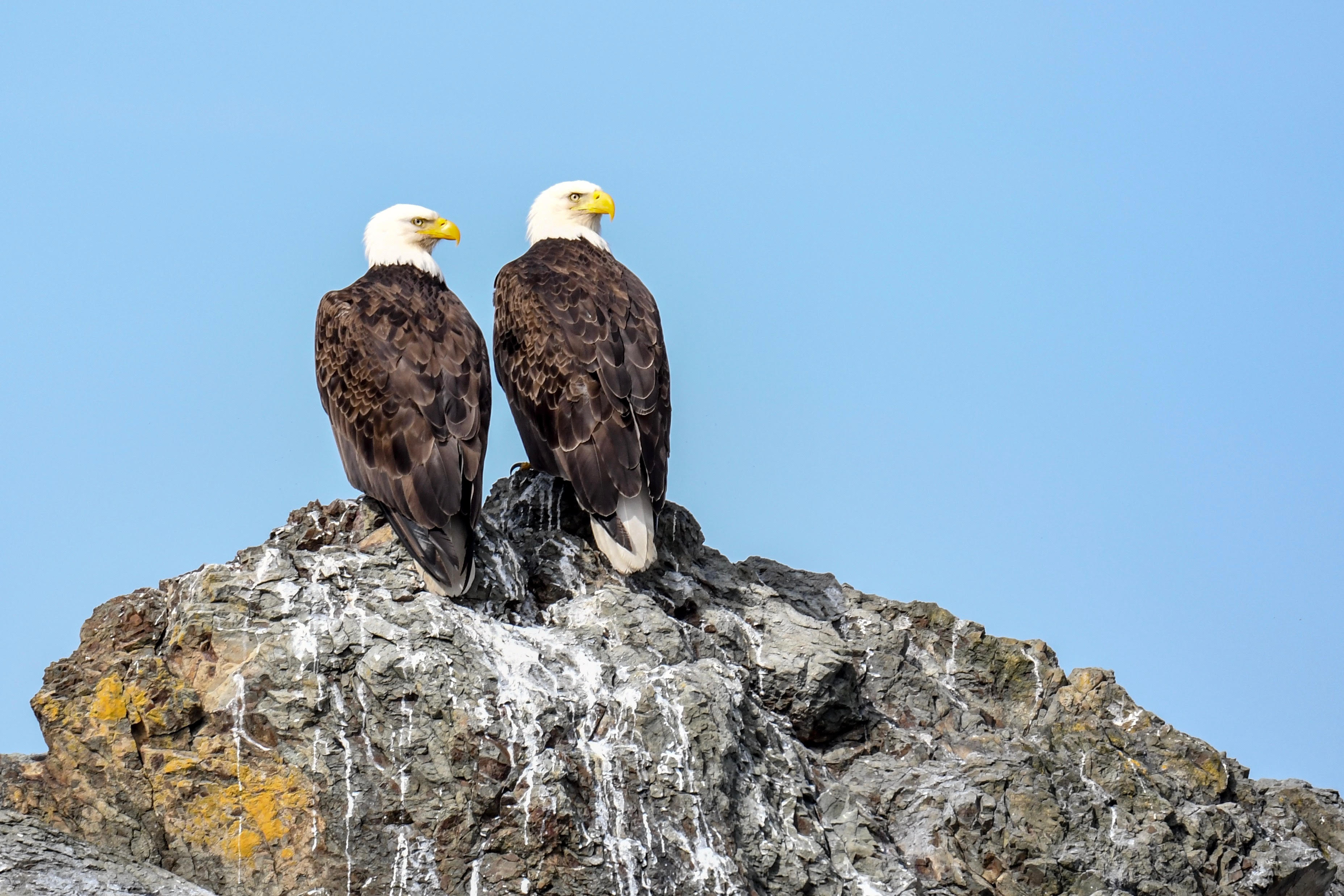 Given these circumstances, reversed size dimorphism enables males to grow and develop more rapidly without unduly threatening their female siblings.