Knocked out of the nest

This past Tuesday many of us were shocked to witness the fall of a Hanover eaglet from the nest. As confirmed by viewers who know the individuals well, the 12-week-oldeaglet referred to as Star was knocked out of the nest, likely by Liberty the mother. Upon review of the footage, the scramble for ownership over a fish seems to be at the center of the commotion resulting in Star’s exit. Educational coordinator for the eagle cam at the American Eagle Foundation in Tennessee shared that during her years of bald eagle observation, she has noticed that 12-week old eaglets are notably “grabby,” and become increasingly feisty towards parents at this age. A likely explanation for Tuesday’s occurrence is that the combination of no elbow room, a tasty fish, and a nest full of aggressive eagles resulted in a chaotic tussle. However, only the eagles know the true verdict.

While this was an understandably disturbing interaction to observe, fledglings don’t always leave the nest gracefully or peacefully. As mentioned last week, 1 in 7 bald eagle nestlings fledge before they can fly, spending several days on the ground or on a low branch. There is a high likelihood that Star is safely perched near the nest, and realistically, his/her next meal is just a begging call away (though unfortunately for us, out of sight). Eagle parents will at times encourage hesitant young to fledge by emitting intentional vocalizations, flying food over the nest without dropping it, perching nearby with food, or simply withholding food. Regardless of the removal method, parents continue feeding recently fledged young, including those that leave the nest prematurely such as Star. It is possible that Star will even climb back up into the nest. In one astonishing case that took place in Tennessee’s Shiloh National Park, an eaglet was on the ground for six weeks before finally fledging at 14 weeks of age. The parents fed the eaglet until it was ready to fly, and in the end, all was well!

The restlessness we have observed in the nest this week is a good sign: both Star and Stripe have been “branching” meaning practicing short hops from one branch to another. They have also been beating their wings to strengthen their flight muscles and test out their wing coordination. Physiologically, eaglets are prepared for flight much sooner than we perceive as the observers; the final touch of fully emerged flight feathers and practice flights are the key steps that have yet to be completed by the Hanover eaglets. 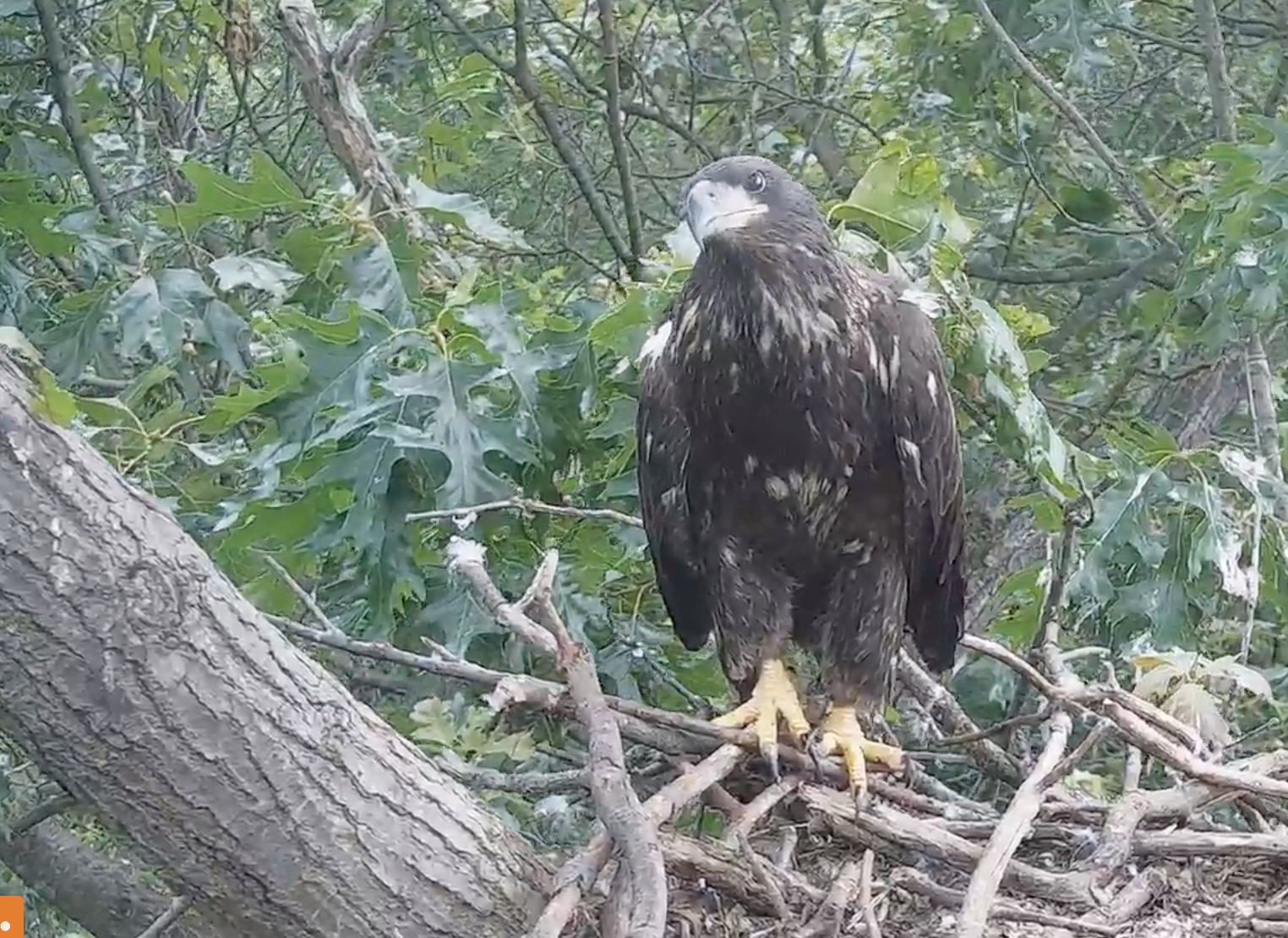 Many of us have stumbled across baby songbirds that have fallen from the nest, followed by immediate concern. This is due partially to their small size and vulnerability to a wide range of predators. Eaglets on the other hand, are large, foreboding youngsters with adaptive minds and attentive (though sometimes clumsy) parents. Recently fledged bald eagles have been reported to remain near their parents for several months. Extended family ties are a rarity among many bird species, but for relatively large scavenging raptors such as eagles and vultures, loose family associations and an extended training period are the norm.

In long-lived species like bald eagles, adult survival is quite high, however roughly half of the fledglings do not survive their first year. Many factors influence this survival. Even so, both Star and Stripe have a good shot at successfully completing the rest of their childhood days and becoming healthy adults like their parents.

Bald eagles are resilient birds with a high incentive to care for their young for as long as necessary. Liberty and Freedom have invested a great deal of energy into the success of their offspring and throwing in the towel at this point would be an extremely atypical behavior for such experienced parents. Even if Star isn’t physically in the nest, Liberty and Freedom both have the knowledge and instinct to respond to this situation effectively. Accidents happen, but even wild animals must keep on keeping on. We, as dedicated yet understanding viewers, strive to do the same.

Note: As a researched-based conservation organization, we are constantly faced with tough decisions on how to protect raptors at the individual and population levels, while also maintaining an ethic that allows wildlife to remain wild. Nest cams provide us with a secret look into the lives of these beautiful birds. However, the action of establishing a camera does not provide us with the right to intervene, even when we become aware of unpleasant events. As humans, we often believe we have the right answer. The chance of being incorrect, however, is high. We could actually cause more harm than good by trying to help in situations like the one we witnessed this week (i.e. causing Stripe to leave or stressing out the parents). Nature is filled with thorny realities, and as difficult as it may be, we must strive for an appropriate balance between participation and observation. Thank you for understanding, and for caring.