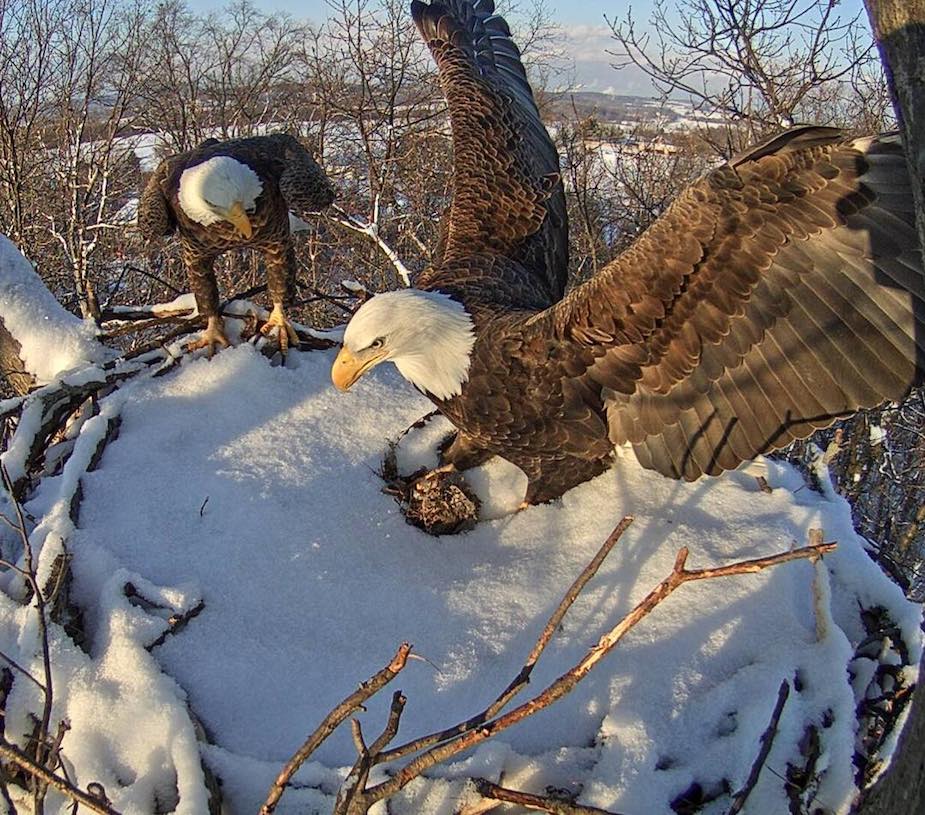 Photo by HDOnTap from 2017 Hanover Season

About the Hanover Bald Eagle Blog

“HDOnTap is also thrilled to be partnering with Hawk Mountain Sanctuary, leaders in raptor conservation science and education, on the new Hanover Bald Eagle Blog,” says HDOnTap Co-Founder Tiffany Sears. “We hope this adds to the live cam viewing experience. “

As the world's first refuge for birds of prey, Hawk Mountain Sanctuary has a dramatic history that started during the Great Depression with amateur ornithologist Richard Pough. In 1929, Pennsylvania's Game Commission placed a $5 price tag on the goshawk's head—a grand sum at the time. Two years later, while Pough was a recent college graduate living in Philadelphia, he became one of a growing number of conservationists opposed to the widespread movement to eradicate wildlife predators, including predatory birds. Pough heard of the place locals called "Hawk Mountain" and decided to visit. There he saw gunners stationed, shooting hundreds of passing hawks for sport. He returned to gather the carcasses lying on the forest floor and take photographs. Pough's photographs were eventually seen by a New York conservation activist, Rosalie Edge. In 1934, Mrs. Edge came to Hawk Mountain and leased 1,400 acres. She installed a warden on the property, a New England bird enthusiast named Maurice Broun, and Maurice's wife and bird conservation partner, Irma Broun. The shooting stopped immediately and the next year, Mrs. Edge opened the Sanctuary to the public as a place to see the beautiful but persecuted birds of prey. She purchased and deeded the 1,400 acres to Hawk Mountain Sanctuary Association, incorporated in 1938 as a non-profit organization in Pennsylvania.

Hawk Mountain Sanctuary is a scientific research center, an international conservation training site, a learning facility for all ages, an eco-tourism destination, a wildlife sanctuary open to the public year-round, the world's largest member supported raptor conservation organization, and one of the best places in northeastern North America to view the annual autumn hawk migration.

Hawk Mountain’s team of raptor conservation and education professionals will be remotely viewing the Hanover bald eagle live cam streams to monitor the nest activity and contribute scientific and educational information to the blog.

Last season proved to be unsuccessful for the Hanover bald eagle pair, commonly referred to as “Liberty” and “Freedom”. Dedicated viewers watched patiently as the parents took turns incubating their clutch of two eggs in hopes to see brand new eaglets brought into this world. In mid-March an “extra” adult bald eagle interfered with the nesting pair which ultimately led to the nest failure. For a detailed yearly season history for the 2015, 2016, 2017 and 2018 seasons, view the history tab on the Hanover Bald Eagle live cams page.

HDOnTap will be going live with the Hanover Bald Eagle cameras on December 3, 2018. "We are excited for the 2019 Hanover, PA Bald Eagle Nesting Season. This is one of our most popular nest cameras,” says Tiffany Sears. "Since 2015, viewers have enjoyed over 25 million hours of 24-7, live HD video and audio from the nest, as well as daily time-lapse clips on screens worldwide.”

HDOnTap, Hawk Mountain Sanctuary and Comcast Business are all hoping for a successful 2019 Hanover nesting season!