Brought to you by Hilton Head Land Trust, Russell Patterson Law and Hargray

A pair of eagles have been nesting here for the past four years. The nest has two live streaming cameras, one PTZ and one fixed HD camera. The nest is on private property in an undisclosed area of the island.

The eagles at this nest have been named Harriet and Mitch after the Underground Railroad crusader Harriet Tubman and General Ormsby M. Mitchel, who founded the Town of Mitchelville on Hilton Head Island. Both namesakes carry importance to american history and a story unique to Hilton Head Island.

Hilton Head Island is part of the Lowcountry region in South Carolina and well known for pristine beaches, wildlife and nature. The island is 12 miles long with significant historical parcels of land, beaches and salt march that hosts deer, alligators and birds. The island is home to a variety of wildlife and other large bird nests call this island home, such as osprey, red-tailed hawks, red-shouldered hawks, owls and great blue heron, to name a few.

Eagles are opportunistic feeders, their diet consists mainly of fish but they are known to pray on small mammals or small reptiles in the area.
The lifespan of an eagle is about 20 years.
The eagle builds the largest nest of any North American bird and the largest tree nests ever recorded for any animal species, up to 13 feet deep, 8 feet wide and around 1 ton in weight.
The typical wingspan of an eagle is between 5'11 ft and 7'7 ft they usually weigh between 6.6 - 13.9 lb
The bald eagle breeds at 4-5 years of age they often return to the area where they were born
Eagles generally mate for life unless one member of the pair dies or disappears, the survivor will choose a new mate
The female is 25% larger than the male.

September 15, 2022 - Harriet and Mitch first sighting back at the nest

November 19, 2021 - First Egg Laid!
November 22, 2021 - Second Egg Laid
December 25, 2021 - First Pip
December 26, 2021 - First Hatch HH3
December 27, 2021 - Second Hatch HH4
February 26, 2022 -  HH3 falls from the nest, The eaglet was recovered by Russell Patterson, lead sponsor of the Eagle CAM, and taken to The Birds of Prey Center Avian Medical Clinic in Awendaw, SC the following morning by Robin Storey, Board Member of the Land Trust.
February 27, 2022 - HH4 experienced seizures and falls from the nest. They were also recovered and taken to Avian Medical Clinic the following morning.
February 28, 2022 - Both Eaglets pronounced dead and corpses taken to be examined by Clemson University Department of Animal and Veterinary Sciences and other U.S. Agencies to diagnose the cause of death of the eaglets.
March 5, 2022 - Determined Eaglets cause of death was the Highly Pathogenic Avian Influenza ("HPAI") commonly seen in wild birds.
March 22, 2022 - Both Adult Eagles, Mitch and Harriet seen in the nest.
March 24, 2022 - Two Ospreys seen in the nest 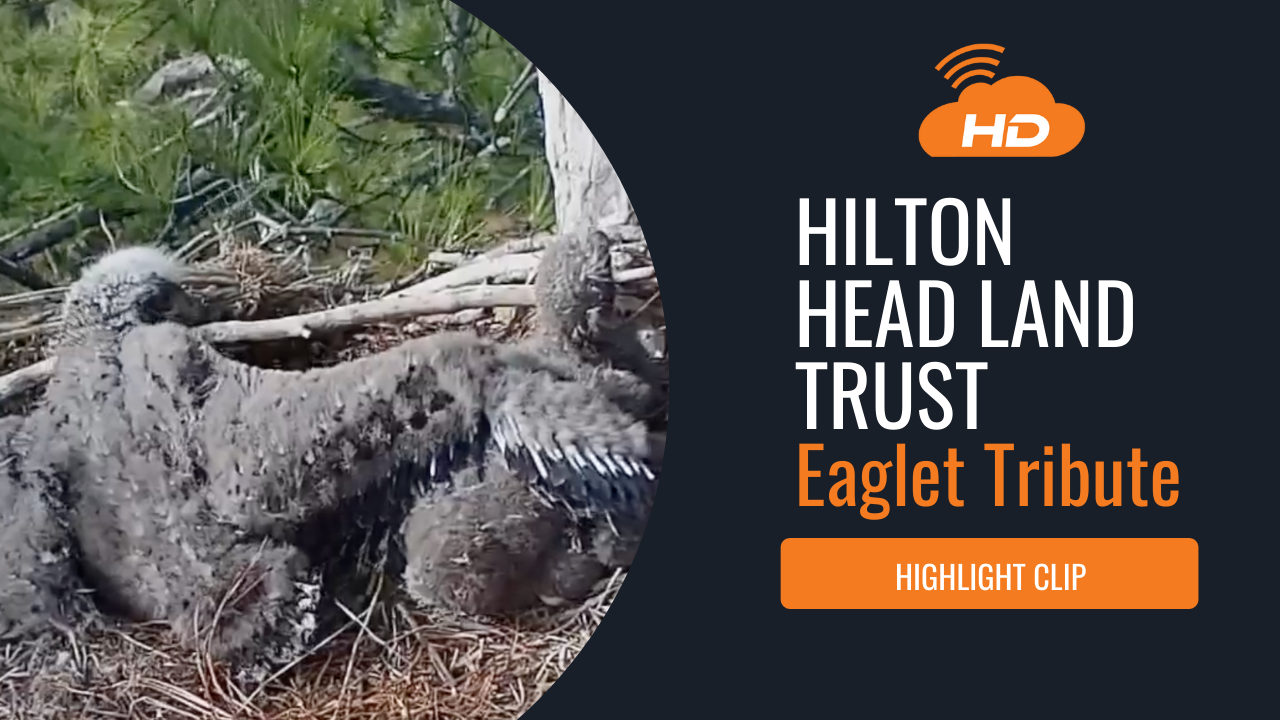 Watch this highlight of the Hilton Head Land Trust Eagles as they grew from hatchlings to fledge age. The eaglets unfortunately passed after falling from the nest. 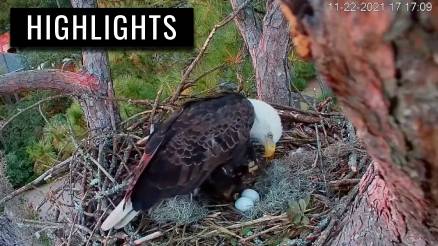 Watch this highlight of the second egg being laid in the Hilton Head Island Eagles Nest! 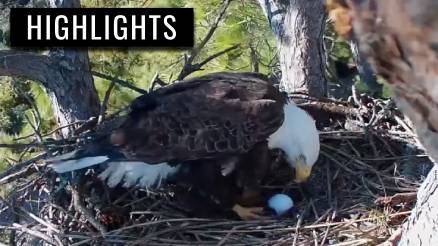 Welcome to the Raptor Nest! Currently being occupied by two Great Horned Owls!

REMINDER TO VIEWERS: THIS IS A WILD NEST AND ANYTHING CAN HAPPEN. WHILE WE HOPE THAT ALL EGGS HATCH AND GROW TO BE HEALTHY AND SUCCESSFULLY FLEDGES EACH SEASON, THINGS LIKE SIBLING RIVALRY, PREDATORS, NATURAL DISASTER AS WELL AS TERRITORIAL DISPUTES CAN AFFECT THE WILDLIFE. NATURE MAY BE DIFFICULT TO WATCH.