Syracuse University located in Central New York is the home to a devoted red-tailed hawk pair, Otto and SU-Sue who’ve been nesting on SU’s Lyman Hall since 2012.  Their breeding and hunting territory covers over one square mile and includes Syracuse University (SU), adjacent SUNY College of Environmental Science and Forestry (ESF), nearby Oakwood and Morningside cemeteries and Thornden Park as well as the neighborhoods close to SU.

Red-tailed hawk (Buteo jamaicensis) color patterns are highly variable but their basic appearance is consistent with a light chest and brown to cinnamon-colored bellyband across their mid-line. Their characteristic brick red-tail develops in their second year of life giving the species its name. Juvenile red-tailed hawks have brown to cinnamon barred patterns on their tails until their red feathers form. This occurs in a process called molting when new feathers form to replace the old ones. Molting usually starts in the early summer and lasts until fall.

The feather color patterns of the male Otto and female, SU-Sue are quite similar and it can be difficult to tell them apart. Each year, they molt into different patterns from the year before so it is interesting to see what each new molt will bring. This season, Otto’s head feathers are lighter than Sue’s and he has a larger patch of white feathers above his beak than Sue. Otto’s chest feathers have cinnamon colored streaks as compared to her pristine white chest. All of Sue’s tail feathers have dark subterminal bands, whereas Otto’s middle feather has a dotted subterminal band and his outer feather bands are dark like Sue’s. Female red-tailed hawks are usually up to 25 % larger than males but Sue is only slightly larger than Otto.

It is thought that Red-tails do not breed until their third year of life but in 2018, a one year old adult male successfully bred three chicks at Cornell University. We don’t know for sure how old each of our SU hawks is, but based upon the fact that they may have had a nest on Link Hall in 2011, Otto and SU-Sue could be at least 11 years old. Red-tailed hawks can live 20 years or more in the wild.

Normally red-tailed hawks mate for life and are monogamous, however, we had an uncommon situation in 2016 when the nest was tended by three adult red-tails, Otto, SU-Sue and a second female named SUNY (pronounced Soo-Nee). This unique trio successfully raised six chicks in one nest. Red-tailed hawks are not known to cooperatively nest like other species of hawks, i.e. Harris’s hawks. But our trio certainly seemed to be “cooperating” well. While there is no way to know for sure, the most likely scenario would have been that each female laid three eggs in the same nest, as it would be highly unusual for one female to produce six eggs. We have no photographic record of mating behavior with SUNY so we don’t know if another male was involved or all six are the progeny of our male, Otto.

An area hawk expert suggested that SUNY may have been an offspring of SU-Sue and Otto and her male partner died so she returned “home” to lay her eggs and raise her chicks with her parents help. We will never know, but all three worked together and SUNY stayed in the area near Otto and SU-Sue for another year before we lost track of her, hopefully to find a mate. Since then Otto and SU-Sue have been a monogamous, devoted pair.

Prior to 2016, eyewitness accounts of nesting on Lyman Hall from 2012-2015 confirm that Otto and SU-Sue had been a monogamous, devoted pair. There were no live hatches in 2012, one chick hatched in 2013, two chicks hatched in 2014 and 2015.  In 2017 and 2018, the pair raised successive broods of three chicks to fledging witnessed on nest cams installed in 2017. We look forward to watching the 2019 season of nest refurbishing, egg laying, incubation, hatching, brooding and fledging from our newly installed, upgraded PTZ cams built and livestreamed by HDonTap. 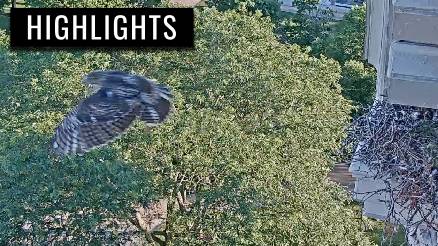 Enjoy this clip of the second Hawk to fledge the Syracuse University Hawk nest of the 2021 Season. 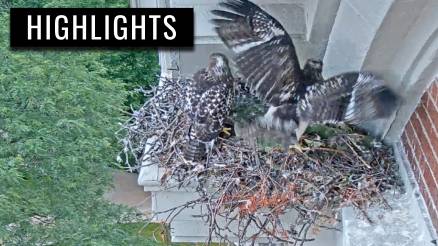 Enjoy this clip of the First Hawk to fledge the nest of the Syracuse Hawks 2021 Season! 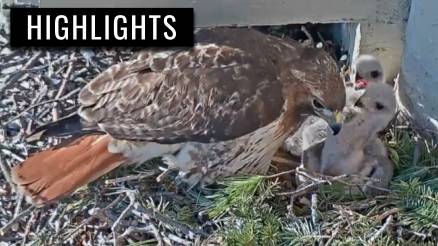 Watch a Season Recap from the Syracuse Hawks Nest over the 2021 Nesting Season! 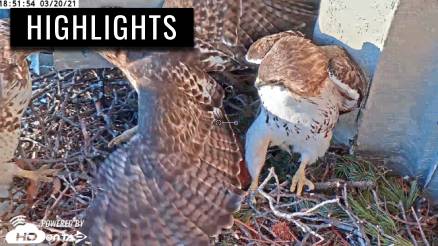 Watch as a juvenille intruder enters the nest while Sue and Otto the resident hawks at this nest defend their territory!

Syracuse Hawks experience an intruder in the nest, watch both male and female hawks defend the nest. 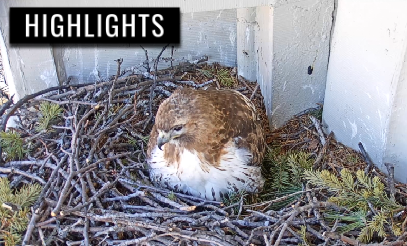