In Partnership with the American Eagle Foundation  • Powered by HDOnTap

About This Pair of Bald Eagles

Mr. President and The First Lady, returned to the National Arboretum on October 15, 2018.

In 2020, this nest saw some interesting changes. The First Lady returned back to the nest Oct. 7th 2020. Both TFL and Mr. P made frequent stops at the nest for nestorations, feedings, matings and all was well. The season appeared to be going well and looking towards a successful season. A 4-year old visitor showed up on February 15 and The First Lady has not been seen since Valentines Day of 2020. The visitor was not the only eagle to stop by and pay attention to this established nest. The new visitor was the 5th of the year so they were referred to as V5. Ever since V5 made her prescence known at the nest, her and Mr.P have acted like a mated pair.

Their tree is located on the western edge of the Arboretum’s famed Glenn Dale azalea collection, the destination of springtime visitors to the Arboretum since 1949. The azaleas bloom in late April and early May. Staff from USNA engaged in early consultation with Craig Koppie, US Fish and Wildlife Service Chesapeake Bay Field Office to avoid disturbance and minimize potential impacts to the new Eagle pair. The presence of the Bald Eagle nest so close to Azalea Drive along the south side of Mount Hamilton means the road is closed off to vehicles. A smaller segment of Azalea Drive will be closed to pedestrians because it is within the buffer zone (roughly 660 feet in diameter surrounding the nest site). Visitors can still explore most of the Azalea Collections from the east side trailheads, however, visitors are not allowed to see the nest itself.

The current nest is approximately five feet wide by six feet deep. The tree selected by this pair is large enough to support a nest, is within sight distance of the river, and is also located in one of the few parts of the District with limited human disturbance.

The Arboretum has a number of mature trees that are large enough to support an eagle’s nest. Even though this nest is in an urban area, the Arboretum provides quality wildlife habitat and enough open space to dampen the commotion and noise from the city. Also, the Arboretum’s eastern boundary is the Anacostia River, which is a significant food source.

There are about 50 species of fish in the Anacostia, some are minnows, alewives and other small fish but there are some like shad, bass, herring, warmouth, gar and American eel that they could catch. We know for sure they are eating catfish, most likely a bullhead type and perch (we saw that when USFWS did their fly over last season, it was sitting on the edge of the nest). It was noted that the eagles may have been feeding on either a female ruddy duck or coot, there was also some herring or ring-billed gull primary feathers in the nest.

The Anacostia River supports 188 species of birds and nearly 50 species of fish. Some of the animals you can see in and along the river include: bald eagles, beavers, white perch, ospreys, striped bass, cormorants, crayfish, herons, turtles, egrets, otters, herring, red fox, shad, kingfishers, and bullhead catfish.

A very interesting season unfolds, after much affection and mating attmepts in the nest between Mr. P and The First Lady, the season began to take an unexpected turn as a younger visiting eagle would not leave Mr. P and this nest alone for several months. At first the visitor was met with resistance from Mr. P and TFL shewed the eagle out of the nest. After a dramatic dive bomb attempt to get the visitor to vacate the nest, TFL was not seen again. This season was a nest takeover, Mr. P and V5/Lotus were seen making many contributions to the nest, bonding and mating together between March and June of 2021.

Summary: The season started off hopeful with lots of courtship, mating and nesting behaviors seen by Mr. President and The First Lady but unfortunately this was the second unsuccessful season for the mated pair. The season was kept interesting with many nest intruders, some of which Mr. President was seen mating with. 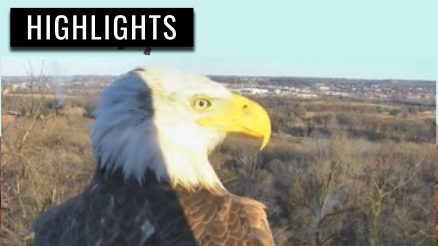 Enjoy this Highlight of the National Arboretum Bald Eagle Nest as a new Female enters the nest and begins to bond and mate with Mr. President.