In partnership with the City of Westminster  • Powered by HDOnTap

HDOnTap is excited to announce a new partnership with the City of Westminster! The live stream is intended to educate viewers by showing nature in an ungauraded fashion.

This cam is located on Standley Lake facing Bird Island.

Since January of 1993, a mated pair of Bald Eagles has been nesting on the northwest side of Standley Lake. When the eagles were first observed building a nest, Standley Lake officials closed off access to the area so the eagles would be undisturbed in their attempt to nest. Bald eagles usually mate for life and reuse nest sites. Because they are sensitive to human disturbance, it is imperative that the area remains closed to protect the nesting habitat.

In 1996, the eagles successfully produced their first pair of offspring. They have continued in that success for the last 21 consecutive years, producing two eaglets each of those years, except in 2015 and 2017 when they were successful in raising three eaglets! The eagles have been using that same nest for 24 years, until this past year when they decided to build a new nest just to the east of their old nest site.

They usually lay their eggs in the first weeks of February. Incubation lasts for a period of approximately 35 days, at which time one to two nestlings will hatch. These nestlings will first leave the nest in late May to early June, approximately 72 days after hatching. Both parents take care of the young eagles even after they leave the nest. The young will leave the area sometime before October or November, either on their own or when the parents force them out.

Season Summary: This was an eventful season, 3 eggs were laid. Late in the incubation period the female eagle was attacked by another female eagle. After this incident the egg laying female did not return to the nest and "Dad" took over the incubation responsibilities. One egg hatched and "Dad" tried his best to care for this egglet, trying to get the eaglet food on his own while trying to survive himself. Unfortunately, the eaglet did not make it. The unknown female eagle was seen frequenting near the nest area at that time and even joined "Dad" in the nest a few times moving around the eggs, but not consuming them. The remaining eggs did not hatch. However, the female eagle and "Dad" began to bond and tolerate one another. At the end of the season a few mating attempts were made. 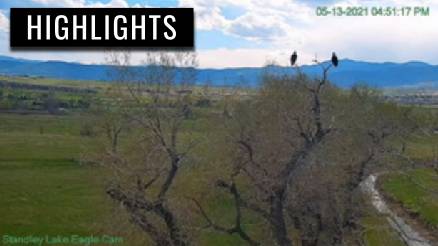 Watch this Highlight Clip of the Westminster Eagles parents the day that tragedy struke and the nest fell, their eaglet did not survive.

We are so excited to announce our partnership with the City of Westminster!