About the Origin of the Dulles Wetlands:

A partnership was formed between Dulles Greenway and Loudoun Wildlife Conservancy in 1996 when the private 149-acre wetlands preserve was established during the construction of the Dulles Greenway roadway to mitigate the loss of roughly 64 acres of federally protected wetlands. This wetlands mitigation provided a 2:1 replacement ratio for forested wetlands and 1.5:1 replacement ratio for emergent wetlands.

The Dulles Wetlands Ecosystem and Wildlife:

The Dulles Greenway Wetlands is a vibrant thriving ecosystem to a wide variety of plant and animal species. Many of the rare bird species recorded in the Birds of Loudoun: A Guide Based on the 2009-2014 Loudoun Country Bird Atlas were found almost exclusively at the Dulles Greenway Wetlands. In fact, 158 bird species were recorded on the Dulles Greenway Wetlands, including Great Blue Herons, American Egrets, Green Herons, Mallards, Black Ducks, Green-winged Teals, Red-tailed Hawks, Wilson's Snipe, Sandpipers and nesting Bald Eagles as seen in this live video feed. These diverse wetlands are home to other wildlife, including red foxes, deer, beavers, river otters, painted turtles, snapping turtles and box turtles.

About the Dulles Wetlands Eagle Nest:

This live cam setup includes two live webcams and audio for this Bald Eagle's nest about 40 feet up in an oak tree beside a creek. The two bald eagles have been nesting at this site since around 2005, their nest is estimated to weigh nearly a ton. The nesting seasons previous history has only up until this point been documented from the ground. 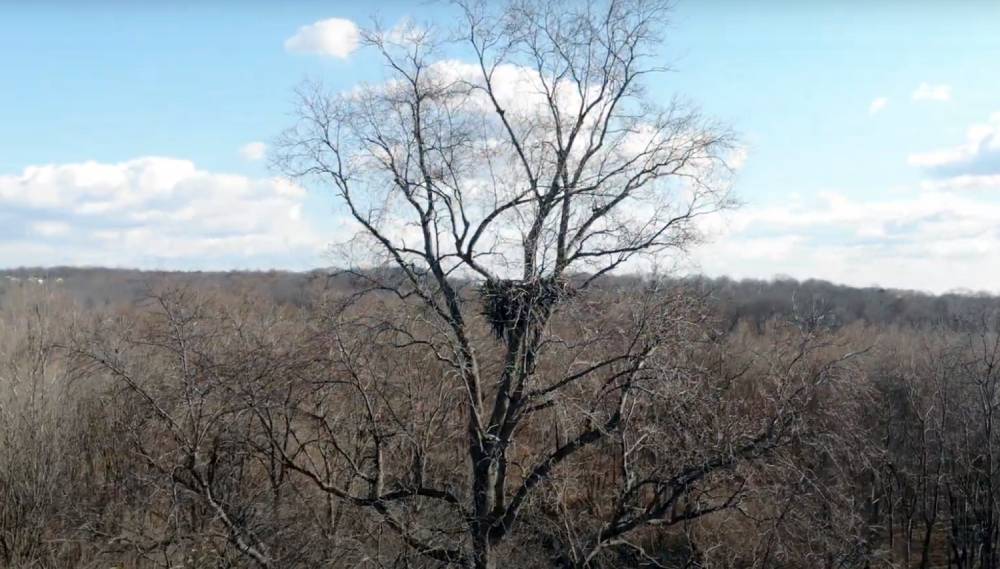 Toll Road Investors Partnership II, L.P. (TRIP II), headquartered in Sterling, Virginia, owns and operates the Dulles Greenway. The Dulles Greenway is a privately owned 14-mile toll road that provides a non-stop connection between Washington Dulles International Airport and Leesburg, Virginia. Dedicated to providing a safe, efficient, and reliable transportation solution for communities in Northern Virginia since 1995, the Dulles Greenway has stood as an innovative model for advancing infrastructure through public and private cooperation.

2005 - This Eagle's Nest was first established

All Previous seasons have only been recorded from observers on the ground. 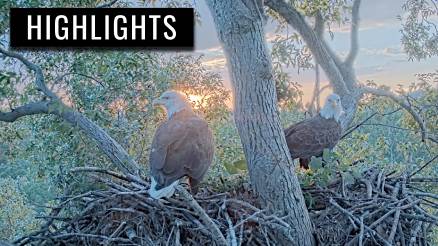 Dulles Greenway Eagles stop over at the nest for sunset, the eagles move a few sticks and enjoy a bite to eat before flying off into the sunset 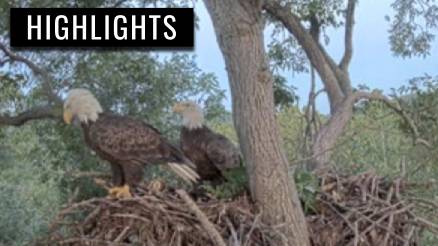 Watch as the Dulles Greenway Eagles first land in the nest after the live cams were installed.

First Season Live on Camera for you to Enjoy!

Reminder to viewers: This is a wild Bald Eagle nest and anything can happen. While we hope that all eggs hatch and grow to be healthy and successfully fledges each season, things like sibling rivalry, predators, natural disaster as well as territorial disputes can affect the wildlife. Nature may be difficult to watch.